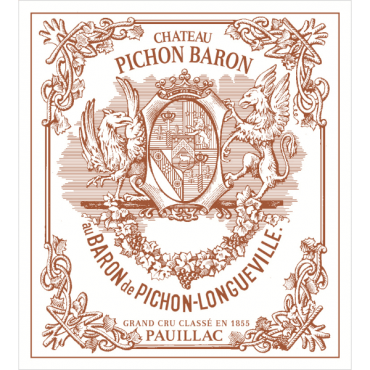 The Domaine Pichon Baron covers 73 hectares. This terroir with exceptional properties, benefits from an oceanic climate softened by the proximity of the Gironde estuary.

It is made up of quaternary gravel, composed of large pebbles and sand typical of the appellation, which is a paradise for the cultivation of vines. The composition of the subsoil favors the storage of rainwater for the roots, and the relief made up of hills, naturally accentuates the drainage.

Composed of 65% Cabernet Sauvignon, 30% Merlot, 3% Cabernet Franc and 2% Petit Verdot, the vast vineyard of Pichon Baron has been carefully divided into parcels.

The great terroir of the Pichon Baron hillock, the historical plot of the estate, already in production at the creation of the cru in 1694, is exclusively dedicated to the production of the Grand Vin and represents today the major part of its blend.